So this is an idea/concept request.

Since I'm not really that great with the component level stuff and I'm getting to the point with AI I want to try and do something with it I'm thinking maybe an RC car.

The major pieces parts I'm working with would be a Jetson nano, raspberry Pi 4, and Pi zero w. Those are what I have easy at my disposal.

My general thought is to get a cheap RC car from Walmart break into it and somehow control it with one of those pieces. Would probably prefer having a pie zero on board and doing something to control it from the Nano but it's all just very conceptual on that side.

I would not rule out an inexpensive Arduino for the basic controls. Then control that with your AI system. If wires get crossed in assembly or a crash, I'd rather see Arduino smoke than Jetson or Pi smoke.

If there is a hobby shop in range of where you live, I'd give them a check also. They may have a base kit that is near the same price range, with replaceable and modifiable parts. (and more room for such)

Great suggestions. And yes for sure in my mind I'm not putting a Jetson Nano or a raspberry Pi 4 out for demolition derby LOL 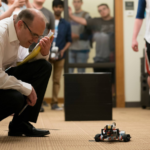 I have an older and larger Jetson TX2 and had a lot of fun running object recognition algos on it using yolo and tensor flow.

I would also chose an Arduino first for the low level control, but I would suggest going with the one you are most comfortable with.  Personally I choose the Arduino / Micro-controller when every possible for the reactive / low level robotics applications because I do not need the multi-tasking os or complexity / configuration / etc.  I just want to run my code and directly control the I/O which is what the Arduino is purpose built to do.  Most of time (not all) you are going to want more deliberative or AI based workloads to have more CPU / Memory / etc than you get on a Pi and be communicating that information in a hybrid situation anyway (which you are planning with the Nano).  Sorry for the long winded answer and circling back around, both are great options, I just wanted to explain the reasoning behind my preference.  Personally I am comfortable using a basic BlueTooth adapter for serial communication but you may find the Pi easier in this regard.  Once you have established a link between your controller and system like the nano you are in business.

Many good points especially the Arduino controller thing. I

've basically waded around in the pi ecosystem and I'm comfortable with it and haven't really had any Arduino experience yet but thanks to dronebot I feel certain I could 🙂 I do envision putting some small microcontroller like a pie zero or Arduino or something on the vehicle and then wirelessly controlling it with a nano.

I've made it through training my own network model now and my first task I think will be simple movement control through hand gestures.

After that work into object avoidance and then the full autonomous wandering around thing.. way way down the road LOL

Oh I got it to talk today based on network inference that was kind of cool. Thank you for the input 🙂

Awesome, I am interested to hear about your progress..  I write a lot of low level object avoidance algos and (little bit of a shameless plug) started to document using them in a video series..  the first is here:

there is currently one more after that one and more coming.  The algorithms I am using are reactive and low level but they still might be helpful.

PS: Sorry about the embedded link, I tried just using a regular one but it seems to embed automatically.. Also as a life-long forum user I just want to let everyone know that I only posted because it was directly related (and hopefully helpful) and I also reached out Bill when I joined.  I do read (and have deep respect for) the rules and community!

Thank you for the video links! This is something I will absolutely need in the very near future.

I'm just now to the point where I'm knowing what the questions are LOL.

So I have a partner in crime who says they will split the cost of a project car with me and they're pretty bent on getting one. Basically they would do the mechanical and I would do the programming.

We've discussed arduino's and pie zeros for controllers and are pretty much split even either way.

So any extra thoughts and considerations or maybe even a kit you put together or a decent vendor. I'm pretty happy with velros but definitely shopping vendors as well. Hard to beat Amazon though..

Thanks for all of the awesome ideas so far you've definitely gave me pause to think.

I have not built a robot yet, but have put considerable thought to it so far.  I still think drive and avoidance sensors should be on a micro controller, rather than a micro computer, for the simple fact it does not have an operating system. It's not going to run off and do other tasks, and possibly ignore an avoidance warning while writing data to disk, or figuring something else out.

Properly programmed, the micro controller does exactly what you tell it with no deviation.  Avoidance sensors could even be on an interrupt to get the highest priority.

Let the brain (micro computer) tell it where to go, and what to do, but let the autonomous (micro controller) just get it done.

Just throwing this out for consideration. Not sure I was clear on my initial post.

Enjoy the project!  I have not tried using an existing RC car platform as the robot base myself, but really I see no reason why it would not work.  Robots like the one you just posted work well, keep in mind that if you want to get into any form of localizing (keeping track of where you are in space) wheel encoders will be key.  You can add them to almost any DC motor setup with a little ingenuity. Bill has videos on lots of great robot kits and also one specifically on using the wheel encoders that you can find on amazon.

I could not agree more, this is precisely why I will grab an Arduino over a pi for motor / sensor control.  Once you discover that it is actually pretty easy to build the communication layer between the controller and another system for mapping, AI, higher level function the sky is the limit.  One caveat, make sure you are not writing blocking code on the microcontroller! (no delays!).

I mentioned serial over bluetooth earlier, but I have have also just done serial over USB with a 5DoF manipulator arm using a micro controller for the inverse kinematics algorithm / motor control and both a DIY google voice kit (uses a pi to access the assistant api) and also my Jetson at one point.  USB was fin for this application since it was not going anywhere.

So I think this will be the car..

I like the amount of sensors and control options and I'm hoping more to use it to learn those things.

Downside is it's not Arduino or standard controller but you can use Arduino ide.. so.. now to wind down what I got going and spend some money. 😁