I'm working on a home navigation robot. It will share a few things with the DB1 such as using mostly Actobotics for the chassis and I'm sure some of the design goals will overlap as well. It will be using an RPI for the main computer along with an Atmega based board (a nano for now for the motors/encoders) and one Pic based board (an Uno32 Pic chip for the sensors) I am using a couple of custom boards I have done for the Nano and one for an I2C bus.  It will use a Pololu Qik serial motor controller to drive the motors via the nano.

My design goals now are:

Find the latest on it at:  https://randomcoderblog.wordpress.com/tag/robotics/

I took a look at Nav Bot blog.  You have a really nice robot project there.  It's nice to see it well documented.

Thanks. It's also a good way to think out loud. 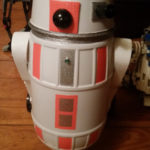 Great project, thanks for sharing.

Thanks. I am hoping to get some work done on it this weekend. Work and home life gets in the way 😉

Did a tracking test with no encoders being read. I want the bot to drive as straight as possible with the encoders only doing touch-up work. The turns are about as consistent, but the omni-wheel does change it as you move.

The plush carpet serves as a nice recorder of the tracks.   Looks to be quite dependable in terms of precision repeatability.   Looks like you did a good job getting the wheels synchronized.

Leaving lines over the carpet doesn't go down well with the wife!

My test rig uses two iRobot motors with hall effect encoders and I was surprised to find that one motor runs at only 78% the speed of the other motor when the same pwm is applied to both at the same time.

This is true.  Going back and forth over a short distance could actually be a very slight arc that is simply consistent.    At least it still shows consistency.  But it may not be going straight.

My test rig uses two iRobot motors with hall effect encoders and I was surprised to find that one motor runs at only 78% the speed of the other motor when the same pwm is applied to both at the same time.

I have found you usually get a large pull in starts, due to the motors clamoring for current (stupid electricity). I'm starting with a ramping function up and down to keep this to a minimum. I will be doing longer tests, but am in my office now and without going out in the wilds of my home, short will do for now. I have done several minutes of that and in turns. The turns do drift due to the omni wheel bumping along at different angles.  I do have encoders though and will correct with them.

On your iRobot, are the motors match in polarity? I mean, do you have them both able to go in the same direction when you go forward or reverse? Some motors go slower in reverse than forwards. I find having them matched this way helps keep them better matched with both either going forward or in reverse near the same RPM.  Another thing to watch for is having your PWM IO lines running at the same frequency.  This can cause drift as well if they are on diffent timer freqs. 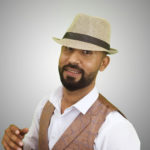 A very small update to my project.

This post was modified 4 years ago by jscottbee
ReplyQuote

Thanks. I goofed on the link copy 🙂