It's a good thought tho. It must be, cuz I had the same idea

I figured you were already there and done that. 😊 But I couldn't resist the urge  to post the idea.

I'm also kind of hoping that the little nano isn't a piece of junk! 😮

I'm also thinking I might try a RPi4 as a desktop computer.  They are a bit cheaper, but I've heard bad things about the new power supply they use.   I also like the idea of having a single system that's interchangeable.  So in some sense I'd rather have two Jetsons.

I'm also anxiously awaiting to learn how to  program the 128 core GPU directly.   That might prove to be quite useful for certain things.  In any case, today I bought another Radial Arm Saw and Table Saw.  I already have  2 of each of these, actually identical.   These are the heavy-duty Construction Series Craftsman saws.   I can't get enough of these.  It's just so nice having different saws set up for different operations rather than having to change blades and molding bits all the time, etc.    Anyway, these were on Craigslist for $50 a piece just down the street from me.  I just couldn't pass them up at that price and being so close.   I just picked them up today and they both run just fine.  Nice and solid, quite running, no vibrations or bearing sounds.  So I'm real happy with the find.    So now I have 3  rad saws and 4 table saws.   And of course, no wife.  That's the key to happiness right there. 😎 If you want to buy a bunch of saws just run out and do it.  Nobody around to yell at you.

I'm also kind of hoping that the little nano isn't a piece of junk!

So am I. I had such high hopes for the thing

I'm also thinking I might try a RPi4 as a desktop computer.

That's about all they're good for actually. My experience with the one I bought showed me that, due to the heat it generates, the demand for proper cooling means that the GPIO is pretty much useless once you add the proper cooling system. So, unless you decide to use a T-Cobbler, you pretty much can't even get to the GPIO

Don't get me wrong, it's a great computer for the size, but, a Raspberry Pi with the GPIO covered by a huge honking fan system isn't much better than an inexpensive, relatively high powered computer

I've heard bad things about the new power supply they use.

in some sense I'd rather have two Jetsons.

I've been working on a 2nd robot project, and I was hoping that the Nano was gonna work out, but, right now I'm not so sure. At this point I'm using the Pi3B to do the programming using one of the Udemy ROS courses (which is really fun on the severely underpowered Pi3B. I had to find creative ways to... compensate, but I managed to make the thing compile rather than lock up) I really need those GPIO's for the motor controllers, touch sensors, and servos... Although, now this is the good part... The GPIO pins on the Nano use the same pin configuration as the Pi, but, they're upside down (sort of). What I mean is that even tho you would think that the CPU socket thing on the Nano is in the way of mounting any kind of HAT, it isn't as long as you don't mind mounting the HAT hanging out over thin air instead of mounted directly over the board itself. Of course this means that it makes for a larger footprint, but you can still use the HATs, which is the critical reason for using these small computers

I think I might be able to make the 3B work for this 2nd robot, but, I can imagine a need for more processing power. Right now, I'm still testing and doing the ROS class (due to the Nano being pretty much out of commission for the moment). If Nvidia doesn't come thru for me, I might still end up buying another one anyway, but, this time I'll buy it thru Amazon and pay for their "protection plan" instead of relying on Nvidia to stay true to their word

The Rpi4 certainly needs a heatsink but there are plenty that do not cover the GPIO ports.  I found just a large heat sink will keep temperature below 80 but even better is the heatsink/case from Pimoroni  keeps things nice and cool 😎 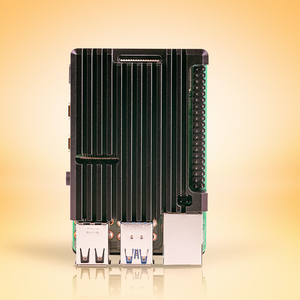 but I've heard bad things about the new power supply they use.

As per @spyder's reply the official Rpi4 power supply has no problems, but nor do other power supplies that provide sufficient amps. A 3A is necessary.  I use a power supply with multiple usb ports without any problem as the amps that can be delivered to each port is more than sufficient.

I've seen that heat sink. Looks nice, but it also looks like it goes up pretty high. Can you still plug in a HAT on top of that without the HAT shorting out on the heat sink ?

Do you have any links to these products?

@Robo Pi - here is a link to a large Rpi4 heatsink

@Spyder - well yes you could bodge connecting a hat with pin extenders and something to support/insulate the underside of said hat, but you may end up with a cooked hat.  To use a hat with this heatsink/case I would make some sort of a 2 tier cage with my 3d printer and connect the appropriate GPIO pins twixt hat and pi with Dupont cables routing through cunningly designed cable ducts. No doubt you could knock up something similar.

This post was modified 4 months ago by byron
ReplyQuote

This case looks like the one byron posted, but it includes 2 sets of 40 pin extenders to raise up the pins to a height which looks to be actually usable. I'm going to order one and see what modifications I can make to actually mount a HAT to it cuz, from the pictures on the ad, there doesn't seem to be any holes for mounting the HAT, and I'd still like to see a fan or two on it even with the massive heatsink

They do have another model, with fans, but, the way they've designed it, the fans sit right up against a flat part of the heatsink, with nowhere to let the air actually circulate

The weird thing is that I keep all my boxes for everything expensive I buy, but, it seems that I've thrown this particular one away, so I have to find a new box

No big deal, but, it's weird

They do have another model, with fans, but, the way they've designed it, the fans sit right up against a flat part of the heatsink, with nowhere to let the air actually circulate

I like the one with the fans better too.   Surely there's a way for the air to circulate?   It would be pretty stupid to design fans with nowhere for the air to flow.   In any case, one thing I'm not too fond of is that they have the fans plugging into the GPIO header.  So if I want to use a 40-pin ribbon cable extender I'd need to figure out how to wire those fans up.

I've already floated that idea thru the rat infested sewer that I sometimes jokingly refer to as a brain, and what I came up with was this...

Since yer gonna have to use pin extenders anyway, why not solder the 2 wires to the base of one of the extenders, then just plug the other extender right on top of it ?

If you solder it close enough to the bottom, it won't get in the way of plugging something else in on top of it

From the picture, it looks like the ones that have fans don't have extenders, which means yer gonna have to buy some anyway, so, why not get some useful ones ?

I bought this kit a few months ago, and I just love it. It comes with, not only pin extenders, but some of them are extra long, leaving space for stuff to be soldered to the base in between pin extenders if you wanna stack them, but it also comes with a few right angle adapters (1 row and 2 row) that I've found to be totally useful in getting me out of a wiring jam

If I was gonna get the one with the fans, I'd be using some of those in the project (well, 2 actually, stacked), and, in fact, I intend to use them in the new heatsink that I just ordered that I don't even have a Pi for yet

Just to say my Rpi heatsink-case works very well without the need for a fan.   I have not used it with any test scripts designed to stress the pi, but for my normal use I have not seen the core temp get into the 60's.  (without the heatsink case I was getting 85).  The swiss accent chappie has tested some with stress test scripts and the max he got with a passive was 70 for one and 66 for another.  His preferred one was the Flirc that maxed at 58.  Some heatsinks with fans maxed in the 50's so this was lower, but I concluded the passives were more than adequate.  Link to the episode is below

I ordered the heat sink without the fan, now all I need is a Pi4 to go with it. The only one I've got is in my laptop, and I modified the case just so I could see the lights on the fan, so, I'll have to buy another one, but, it's not a priority right now cuz...

My JETSON Came Back From NVIDEA !

Well, it didn't exactly come back. They sent me a new one (I checked the serial number) so I'm gonna go take it down to the shop and drill some holes in it, bolts some parts onto it, plug some things into it, and re-install it back into the tank, and see what happens

I bought a new wide screen lens for the camera while I was waiting, so I'm interested to see how that looks too

I'm also thinking about modifying the tires to give it dual wheels too, cuz, dual wheels are cool

And now that I think about it, I'm running out of space on this thing. It needs to be bigger, which means I have to build another frame...

This is starting to get out of hand

I wonder how much power this motor controller can handle...

This post was modified 3 months ago by Spyder
ReplyQuote

Cool. It looks like it's functioning well. And all the programming I did was saved on the SD Card.

And I love this new lens on the camera ! Everything is all kinda smooshed together, but, it's seeing wider, which is an improvement over when I originally turned it on cuz all I saw was a black screen

So now I've got to figure out this object detector thingy, and wondering if I should just install ROS on the other SD Card cuz, isn't that what ROS is supposed to do natively ?