And what the heck  its Saturday  night thanks everyone

If you are trying to install the desktop version, you might have some issues, if that's even possible. It is not set up to run on the ARM possessor. There are some version that are though.

But here is a link. I would use Pi Imager. That seems to be the correct answer these days. It will pull the correct image that you are looking for.

I am now just realizing that this is the exact problem I had. It was Pi Imager that told be it was not supported. I wish I remember the answer. It might have been to use balenaEtcher.

I might have had to change SD cards. The one I used might not have had high enough read/write speeds.

@robo-pi I would really like to eventually move into FPGAs. If you have a channel I would love a link.

I started a very crude channel a while back and put up a few things on eSpeak and Pocketsphinx.  When I start posting videos on FPGA's they too will be quite crude.  There's so much to cover on FPGAs.  Add to this that I'm only just a beginner with them myself.  Although I have worked with them before many years ago.

I'll be working with very inexpensive, and what many people consider to be "obsolete" FPGA and CPLD boards.  Although, they are still readily available so I'm not sure obsolete is a fitting label.   The bottom line is that everything I do should be transferable with any advanced FPGA or CPLD boards anyway.

Here's the FPGA board I'll be using:  It uses a Cyclone II Altera FPGA chip.  In fact, it's basically just the FPGA chip itself.  Not many additional peripherals on the board.  That's actually what I like about it.  It does have an on-board 50Mhz clock.  A user defined push button and three LEDs.   It also has an EEPROM chip on the back side that is used to permanently store the hardware configuration data.  I personally think this is a really good introductory level board. 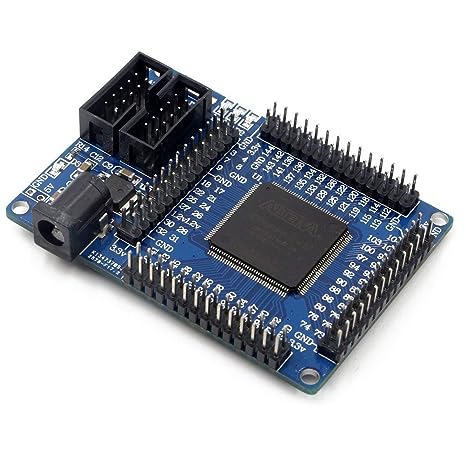 Here's the CPLD board I'm using: This uses the Max II CPLD chip.  This board is also a very bare-bones board basically just the CPLD chip with no extra frills.  It does have a single user accessible LED but no push button. It also has a 50Mhz clock on the board. 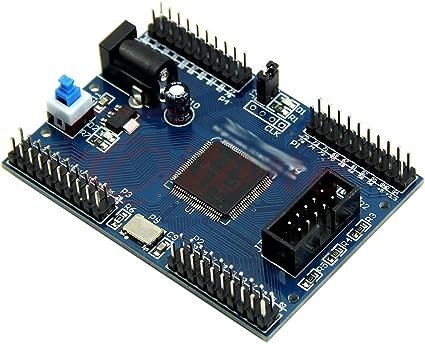 I'll be using Quartus II software to configure these boards.  This is a free download for Windows or Linux.  But it won't run on ARM processors so it can be used on a Raspberry Pi or Jetson Nano.

I don't know of any alternatives to the Quartus II software.  Xilinx makes FPGA software, but they won't work with the FPGA and CPLD chips shown above.  You need to use Xilinx chips and I can't find them on inexpensive development boards like the two shown above.

However, for various reasons, I prefer to develop using lighter-weight software.  It runs faster, and can also be run on a Raspberry Pi or Jetson Nano which I prefer to use most of the time.  You can develop the VHDL and Verilog-HDL using these smaller faster programs.  But eventually you'll need to return to Quartus to define the chip pinouts and program the actual FPGA and CPLD boards.

With those three small and fast programs you can quickly test your Verilog and VHDL designs and inspect the output waveforms to verify that they are working correctly.   As I mentioned earlier, you can do all of this in Quartus II, but it tends to be more cumbersome and slower.   Plus iverliog, ghdl, and gtkwave will all run on a Raspberry Pi or Jetson nano.  They are very small and fast programs.

Finally, I also use CircuitVerse Online Digital Logic Simulator Again, you can do this in Quartus II as well.  But I find Circuitverse a bit quicker and easier to use to design and simulate logic circuits.

When I start making videos on these I'm planning on making three different series in parallel.

My hope is to do these all in parallel.   First I'll design a circuit using schematics, then do the same circuit in Verilog-HDL, and finally the same circuit again written in VHDL.   The reason I'll be doing this is simple.  It's simply what I am personally doing.  So I'll just be making videos to share what I'm doing.

The circuits I make will be simple, and not of much practical use as-is.   But they can certainly be modified for many different applications and I'll be demonstrating how they can easily be modified.

But don't look for these videos until well into the fall or early winter.  I'll post links to them on these forums when I start making them.

@madmisha yep that is the one I used  I wonder if it could be my wi fi   or computer it works with a pre flashed card but I wanted ubuntu for ros since the ros debian install is ridiculous.

I had to use the windows diskpart in order to perform the "clean" procedure before I could format the disk with "SD Card Formatter", then I used "Win32DiskImager" to write the image with no problems found

I know that somebody said that "Win32DiskImager" no longer works, but, I'm still using it with no problems

They're both up and running, and in case you're wondering, they're only 3B, not even a +. Neither is acting as  host tho, they're both client. The Jetson is the host

@duce-robot What SD card are you using? I ended up ordering one that I knew was a higher quality. That might have been my answer. It still works today. It might not allow you to write on a card that doesn't have a high enough read and write speeds to support the OS.

@madmisha 128 gig netac  64 gig evo  it shows files got flashed to it but pi won't boot this is using pi imager.

@spyder yes this is weird  I wonder if the pi imager got corrupted  during downloading  ?

I never tried the pi imager. I've been using Win32DiskImager since forever (Pi isn't the first time I've needed it)

@spyder that's what I'm trying to do get Ubuntu in for Ros but it giving me a lot of hassle but that's ok I'll move the pi 4 to the ma and replace it with a nano or panda I'm leaning towards the panda with it's built in Arduino and no sd card needed .I want an 864 but out of stock.

I didn't realize you were using Ubuntu with the pi4. I'd been using the pi3B, so I just tried the ubuntu 18.04 image on the pi4, and guess what ?

Your problem isn't with flashing the card.

So that's what you should try next... Ubuntu 20. Worked for me