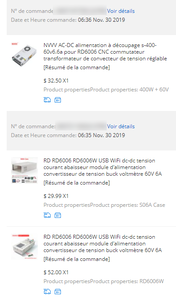 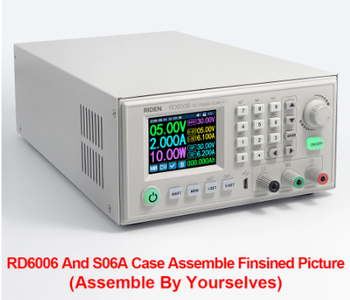 Nice unit ! For $114.5/4-6 weeks I get 60V/6A output and everything needed was supplied, including some spare screws and fuse, except a standard power cord...of which I have an extensive collection. I'll see later on if I really want to add a RTClock battery cell but I think I don't really need the date/time display on the screen ?

Since the RD6006 is actually a glorified step-down regulator, if you don't need 60V/6A, you can feed it with a less powerful input and your output V/A will be limited to input-epsilon.

Forget the W option for Wifi if your Wifi AP/router is not in the same room : I was never able to get a connection through Wifi accross 1 wall (8266 without external antena + metallic case), only through the micro-USB port. 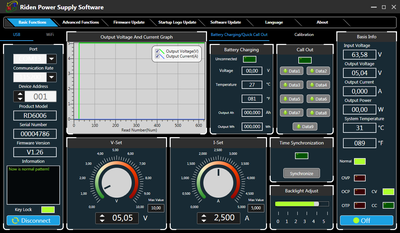 I'll probably never use it, since :

But hey, it's cute ! (and some people may actually require it, for logging purposes for example ?)

[No me spiiiq Mandarin !] Manuals and software are translated as the usual garbage (french version is hilarious, english version is understandable for a froggy like myself). There are videos from RDTech showing the unit assembly as well as some operating aspects, and a firmware upgrade has been recently released : commendable efforts from the manufacturer.  For the software itself, you can even edit the XAML translation files if you wish ?

Overall I'm quite happy with the unit, everything works fine, the fan kicks on and off depending on what you ask from the unit, I was even able to apply the firmware update ? even though the instructions were not totally accurate.  I even't didn't create any magic smoke ! ?

Protection seems ok and for example even if you directly request a 14V output when you have Over-Voltage Protection set at 12.5V, the unit doesn't burn your load : you have to change the OVP value so that the requested V is actually delivered (I did not test Over-Current yet).

I have yet to plug proper measuring equipment to this thing to check its accuracy but I saw videos on YT that indicate it should be ok...

Also : Sorry @pugwash, regarding this question, it does not natively offer +V/GND/-V, but only +V/GND, though the 60V/6A is impressive and maybe can be fed into a divider thingy ?

Is the green banana plug socket connected to earth for a grounding wristband then?

do you mean charging?

@pugwash yes, sorry it's the same word in frogland ?

2 Videos about that unit from EEVBlog (he made a mistake during the first analysis) :

We respectfully(don't believe it) call it "Chinglish"!

Lol and I'm here to teach you Frenchglish ! ?

We always called that "Franglais" but pronouncing the "s".

I spoke it well in Le Havre, Cherbourg and St Malo. ?