Skip to content
Forums
Outside the Worksho...
Technology & Other ...
3D Printer Corner

No, it looks like a fun project tho. (depending on the instructions)

I've already got 3 recalcitrant indignant uncooperative polylactic carbon fibrous nonfunctional mechanized monstrosities that I'm fighting a losing battle with as it is, I have no intentions of starting another one unless I decide that at least one of them is finally a completely lost battle, at which point I have a backup robot that I've been wanting to get moving on anyway (It's already got a body and functional motors, all it needs is a brain) 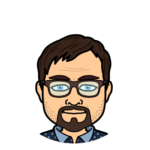 How about everyone with a 3D printer reply with their make and model so we can generate a list of who has what?  Also any thoughts you might want to share about your experience.

I have an ANET A8 Plus that I put together as a kit.  So far I'm well please with it and have learned a lot about 3D printers.  I knew just about zilch before assembling this printer.

I am joining the party late, but I have a 3D printer and have spoken a little about it in other threads. In addition to providing 3D printer models, we should also include what slicer software we use, as that is how we dial in these things.

3D Printer: Creality 10S Pro, with the latest firmware updates from Tiny Machines (I LOVE it!)

Mods: I completed these mods on mine

I also installed a Wham Bam plate, worth every penny.

Cura settings that made a huge difference in my print quality:

I have mine dialed in pretty good, but I am always chasing that perfect first layer.... but that's just the nature of 3d printing.

Loaded ideaMaker, but the first thing I exported seemed to make two files, the gcode file and a dat file.  Is that correct?  Or did I take a mistake?

It was a part I had already sliced with Cura and wanted to see if the end result was any different.

I can tell I'm going to need even more hand holding! 😆

i hope my parts come tomorrow. ive been butthurt about my printer being down i went back in to world of warcraft. i did manage to put the top on my work bench and get the printer move in there.

Yea, ignore that dat file. It's for saving your changes

IdeaMaker is more than a slicer, it can actually change your stl files, which is probably something you don't want to do, so you should only click on the slicer settings unless you have a backup of your original stl

Some of the stuff looks like it could be useful tho, like the scaling button. I can see how that could come in handy at times. I haven't tried it yet, but I can see situations where that would be easier than re-editing the file

Oh, and I goofed up on some info I gave you. The blue is PLA, that's what came out like crap with the steel nozzle. The PETG was okay. Not great, but okay enough that I used it on the robot without bothering to reprint it

I'm working on something right now that isn't a robot, it's something that's gonna work instead. I was gonna swap out that nozzle, but I just remembered that I don't have any more throats that fit this heatblock. And now I'm wondering if I can just swap out the PTFE tubing inside the throat... Never tried that. It must be possible tho, cuz I've had it come out on me before

Ah well, it's a long way til sunup. We'll see what happens

Right. See, this is the upside of having more than one project going at a time

Out of filament ? Fix yer workbench (did you build a lazy suzan for your printer like I suggested ?)

Stain is drying ? CAD up a doohicky

Robot compiling ? Try attaching an ESP32CAM to your Star Wars Drone (I'll let you know how that works out. Those SW drones are pretty powerful)

ive got like 10 projects i can be doing but i tend to get single minded when i do stuff. and right now thats making a T.A.R.D.I.S. on the printer. and no i didnt do a lazy susan i just went ghetto and put it on the bench i still got my bi-spherical globe to finish but i dont have a power supply for it yet need to buy a bench power supply and also got the 8x8x8 rgb cube to build but its just to sad being in the workshop hearing the crys of my printer wanting to run free

EDIT: sorry for all my posts being one long run on sentence its fall out from all my years on IRC

This post was modified 5 months ago by Pakabol
ReplyQuote

sorry but im a trekkie for life. DATA is my hero, picard is my captain but still have much love for the shatt

im a trekkie for life

Me too. But they don't make an Enterprise drone for $50 that flies as well as this one does

Actually, it's the best drone I've ever had

I didn't even care about the Star Wars. I just wanted a drone that worked

The gyros actually work on it. It doesn't drift when hovering. It holds in place beautifully. It's just all sorts of awesome for only $50

The gcode files was not all text as I'm used to seeing it.

Here is a segment where it changes from what I recognize as gcode to something I can't make sense of:

Did I just get a bad export?

All of that funky looking stuff ends at line 738 and then line 739 has this line:

The Cura generated gcode file for the same part had over 1600 lines of gcode that I could read anyway.

It's in mine too. I always thought it was specific to raise3d printers, so I just ignored it. But since you asked, I looked into it, and I found this...

Whoever "Vicky@raise3d" is, it's obvious that English isn't her first language. I understand the complaint in the thread, but, I can't quite understand her response

It seems like it's maybe garbage data, which she says she'll look into trying to get rid of

I think that's what she said anyway. It's kinda odd tho. If it's just garbage data, how'd it get in there ?

So then the ANET, or should I say the Marlin software in the controller, just ignores it?

Still puzzled that the CURA generated gcode has way more lines.  Guess I'm just going to have to try the ideaMaker gcode and see what happens.  Was just a little leery after have gotten used to looking at the CURA code.  Figured that they would have had to be at least very similar.

I think what you see in the GCode above is some custom/proprietary binary data encoded in GCode "comments", which should be ignored by any printer/gcode reader which is not specifically trying to interpret them.

But from the forum post mentionned by Spyder, it seems the huge amount of such "comments" may disturb some printers...

When i look at my Cura-generated Gcodes, I find a block of comments at the beginning describing the print setup, then some comments after GCode initialization tokens from my own initialization setup, and then a number of small comments, throughout the file, that can be used by firmwares and/or Octoprint-like utilities to track the currently printed layer, expected remaining print time, etc...

Below is an example extract of a global "Find" command for the `;` character starting after all the initializations :

In addition to providing 3D printer models, we should also include what slicer software we use,

im using cura 2.3 ive got a set up "fine' that im been using ill take some screen shot in the am as im going to try to sleep "again" 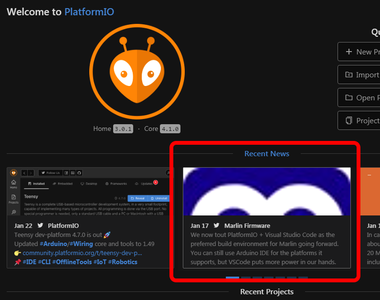 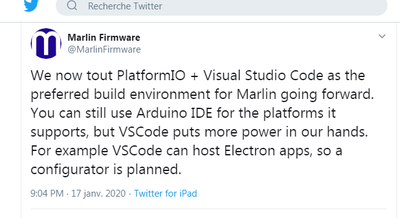