coming to you live

Duce is on the move enjoy!

Duce robot some sounds some ros and some dreaming !😁😁😁

Please stand by we are experiencing technical difficulties enjoy

And the build goes on !

Sometimes this stuff can get just downright difficult and that's why I give people who can do this stuff a thumbs up👍   like everyone    except me lol here on the forum. 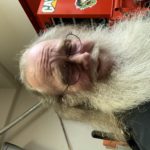 Hey, Duce. I so understand where you're coming from on degree of difficulty, especially from a coding aspect. If, for example, you're doing a simple project like flashing four LEDs from an Arduino Uno; how difficult does the coding have to be?

You can pull four separate pins HIGH and LOW using digitalWrite() commands, or, you can switch the entire rail of pins HIGH and LOW as desired with DDRD and PORTD commands. If all you're trying to do is flash four LEDs, stick with the digitalWrite() commands. If you're trying to reduce the execution speed and are calling interrupts, use the board-level commands. Point being, people can make things more difficult than needed, and I hope whomever previously worked on your project hasn't made it a bowl of spaghetti.

Best of luck in completion.

@itscaseydambit   hi and welcome the duce is a product of one mind  lol mine its an  on going project but close to completion  once I get a few more things in place I'll do another video .hopefully printing 👍😁

ROFL I'll show myself out.

I have yet do buy a LIDAR. I mull it around and never do it. Maybe soon, maybe not 🙂

I am going camera crazy now bot wise.  Looking at some of the cheap k210/RISC-V devices that are hitting the market now.  So cheap!  I got the first one of three I have ordered yesterday and it is kind of WOW. $22USD and it seems nice and is python or C/C++ codable.

@triform  yes that sounds like a good option over the zed camera for $249 a little steep plus it seems like people are having trouble getting them to work in stereo I think I'm going to check it out did you get it on amazon? If so let me know how it works I need one more camera .👍😁

I ordered two from Seedstudio one can from the US WH and the other from PRC.  The last one is from a seller on Amazon.