Here's 2 neat little doohickies that could come in extremely handy, both in the same picture to save space 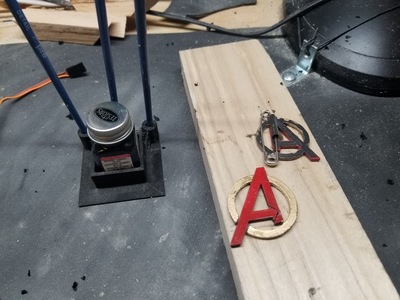 One is the little paint bottle and brush holder. I created this cuz I kept knocking over my little tine paint bottle. I figured that if it had a wider base, it wouldn't fall over as easy, and since I was at it, I added a couple spots to hold the paint brushes

I made a couple of them, They come in real handy for me

Next up is the Avengers pin, which I did a sucky job at painting, but, that isn't the reason for the tip. It's the pin built INTO the print that I wanted to show you

I don't know if this is in the new Cura that most of you are using, but it's in the older version that I originally loaded to use with Octo-Print. Anyway. It's called PAUSE AT HEIGHT

You can find it under plugins, and it's already a script. All you have to do is figure out at what height you want the printer to pause, and when it reaches that height, the nozzle retracts a bit, lifts up, and moves out of the way, then it waits for you to hit the RESUME button

I even inserted a plugin for Octo that makes it say "Waiting for Human intervention", which is kinda stupid, but, it was geeky, so I did it, and it does alert you if yer not ready

What I did for this pin is to print about 2/3 of the pin holder, then pause it, then insert the pin, then hit the resume button, and viola, the pin is now part of the print

You can do it with anything. I've stuck magnets, bolts, nuts, all sorts of stuff can be hidden inside a print...

Another kewl thing, I wouldn't exactly call this a trick, but, it's really cool. Printing with carbon fiber produces just the Best. Prints. Ever. (for me anyway) 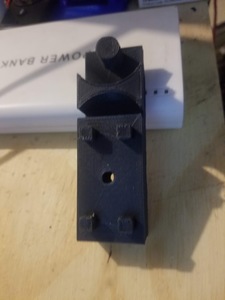 Sharp lines, sharp corners, that mounting hole in the middle is perfectly round...

I love this stuff

On the other hand, when it strings. Wow. It's a mess. And don't bother putting a grinder or cutting wheel to it, cuz, that just doesn't make your day go well at all. A hand file tho, that works. So does sand paper. It sands down pretty nice (the picture is hot off the printer, no sanding was done)

i love all of this

I guess you could call me the Guru of Useless Information, which, by some odd coincidence, comes out to GUI if you use the initials 😉

Here's another trick that nobody will tell you about. (Probably cuz I'm the only one stupid enough to try it)

The heated bed is just aluminium, which can occasionally produce micro warps, which can cause the print to not stick in random spots. Now, you guys with the borosilicate glass on yer beds won't have to worry about this, but, my printer didn't come with that option, so I had to buy some separately online, which I quickly broke, and was kinda pricey (for me anyway), so what I did was go to the Home Depot, and for a dollar and change, I bought a regular piece of window glass (which the filament does NOT stick to) and I put a layer of painter's tape on it, and then the filament sticks just fine

But here's the trick... My bed is only 220 x 220, a little over 8 inches square. If I lie to the printer, I can tell it that the bed is 8 x 10 inches square and be able to create larger prints than the printer was designed for ! 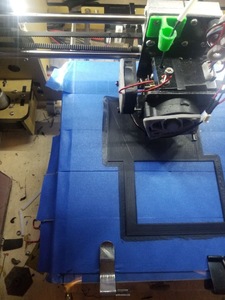 something i never thought of but i will keep in mind

im hoping to get my new extruder heads tomorrow and start printing again one of my new filaments clog my $h!t up big time and i didnt have a .3 mm bit to clear it out  thankfully they are only about $1 USD each and i get 2 bonus clearing tools

but ive put my machine through hell

i sorta want to ask you for the .stl for the paint holder but i also want to try to make my own in fusion 360 once i set my workshop set up going to start on that Wednesday i think

This post was modified 5 months ago by Pakabol
ReplyQuote

.stl for the paint holder

Not a problem. I didn't use fusion for these, I just used tinkercad. I just put in a platform, added a box, added a negative box, and a few cylinders. Sadly, I put a little spider logo on all of them, but, you can change that if you want

Oh, also a cool trick in tinkercad is their toolbox function

What you do is create a "thing" that you will probably use frequently, then drag it over to the toolbox section, and label it, and poof, it's always there in case you ever need it again

I keep that spider logo in there, as well as an imprint of the nuts for #3 and #4 screws so I can just drag a hole into a print that I know is gonna need a nut and screw

It's a great time saver, although, fusion 360 is probably easier, except that I haven't watched the video training on it (even tho I do have the software installed)

you know of any good cad programs for linux

Tinkercad is web based, so it should work on pretty much anything, although I think it does require java

use the maximum amount of space with glass