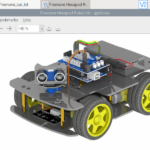 From a realistic point of view (based on what I have seen and heart about ROS up to this point) I would think that an instruction tutorial on ROS would require more like something Paul McWhorter does.

Paul McWhorter basically makes very long series of videos that tackle a subject in excruciating detail over dozens of hour-long video lectures.  I could see Paul McWhorter taking on a video tutorial like ROS.  It would most likely turn out to be a 50 week course. 😊  Especially if he was hoping to cover everything ROS promises to be able to do.

Hello, Who exactly is PaulMcWhorter? I’ve heard of him before on the forum, but no details. How do his videos differ from Bills?

This post was modified 2 years ago by egers
ReplyQuote

Hello, Who exactly is PaulMcWhorter?

How do his videos differ from Bills?

I would say that they are significantly "different".  Not to imply 'better or worse' just different.

Bill's videos are meticulous, very well produced, and basically cover one subject entirely per video for the most part.

Paul's videos are more "off-the-cuff" live.  Although it wouldn't be fair to say that they aren't well-prepared as it's pretty clear that he has done a lot of preparation before making a video.  So while they are still done "live", they are fairly well rehearsed.

Paul's videos tend to run in series.   That is to say that he has quite a few series of videos dedicated to following through on one specific topic in extreme depth.  Take a look at his "Playlists" for an idea of the different topics he covers.

As an example he covers,

I really appreciate Paul's long detailed courses.  It really does amount to taking a college-level course.

Of course, if he's not covering the material a person is interested in, then they aren't going to be inviting for that person.  I was looking for a course on "AI on the Jetson Nano", so when I found Paul's course on that it was like God-sent.   And he just happened to start that course just as I was getting into the topic.  So it was perfect timing for me as well.

I also found the 9-Axis IMU course to be another topic that I was personally interested it.  So I'm pretty much addicted to taking those two courses.

I mentioned Paul in this thread because I'm thinking that to really do ROS justice I would imagine that it would require a very long series of videos to explain it properly.    Although I don't think Paul has any plans on making a course on ROS.  But if he did, I'm sure it would be great.

Bill doesn't dictate what you need to drink to watch his videos.

If you aren't an iced coffee addict you'll be in violation of Paul's beverage dictatorship! 🤣

What I imagined is that ROS would make it easier to implement LIDAR and KINECT on a robot assuming you intend to use those two pieces of hardware.

That's another good point about ROS that makes me leery of it.   It's going to be designed around commercially available hardware that I may not have available, or can't even afford.   In that case, I'd end up having to write my own interface to the hardware I do have anyway.

I think this also goes back to the industrial, and commercial end of things again.  If you are designing a robot for production to either be used as a "worker" in a factory, or to be sold to a consumer, having to work with specific hardware isn't going to be a problem.

If you're building robots to be used for manufacturing, then the company just swallows the cost of whatever hardware ROS demand.

If you're building robots to be sold to consumers, then you just pass the high-cost of any hardware onto the consumer. 😊

But if you're a hobbyist who's bank account is in dire straights you might not want to use the hardware ROS has been programmed to use. 😎

So there's a place and time for everything.  Just things that need to be taken into consideration.

... the choice between C++ and Python is not mutually exclusive.  You can use both simultaneously because the Python is actually converted to C++ function calls.

It would be nice to just use C++ as Python is new to me and I hate mixing languages in a project.  But how to convert the Python code to C++ is perhaps beyond my abilities.  I will have to see how hard it is to use them together as I have no idea how that is done.

@casey Don't worry about the Python, it's just for people that don't want to really learn how to program (here come the flames 🙂 ).  Seriously, in ROS all of the tutorials are taught in both c++ and python.  It's just the YouTube videos that dumb it down and only use Python.

And since I don't know either of those I'll be equally lost either way, so what difference does it make ?

...well, one auto-magically wipes your ass, and the other one allows you to learn how to do it yourself in times of crisis 😉

And since I don't know either of those I'll be equally lost either way, so what difference does it make ?

spyder, regardless of what I said above, if you don't know either, and want to get the job done, I would suggest you start with Python.  It has a much lower learning curve and if you don't intend to become a full time software engineer there is really no problem using it.  You will find a lot more tutorials in Python then in c++.