I had to wait til I had some parts that were back-ordered. But I have the parts now, and I've (sorta) got the Jetson Jetbot (sorta) working

One of the build options (OS Build) is called Jetbot. It's a teaching thingy with something called "notebooks" in its internetty controlly thingy. Its designed to work with certain hardware, so I had to wait til the featherwing thing was back in stock, which I assume was out of stock due to ppl building the Jetbot project, which I have (sorta) done 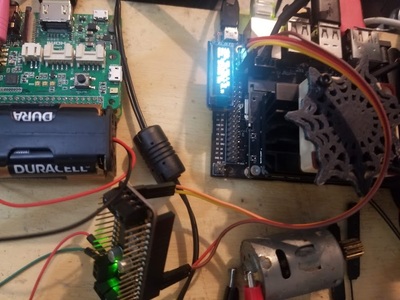 Right now I only have one pair of motors with a chassis, and that's currently installed on the Ubiquity project, which isn't completely working, so I may swap it over. The problem with that is that the Jetson is a little too big for the chassis, so I may have to just put a piece of plywood on it, and mount the Jetson to the plywood. In the meantime, I had one extra motor laying around which I attached to the featherwing thing motor controller thing

along with some batteries to test at least one motor connection at a time, which now works via the "notebook" web controls

This is positive and a step forward. I do have a couple of pi cameras, which the instructions say will work, and it's got a visual trainer thingy to make it recognize obstacles. So I've got to do some mounty-buildy-stuff to make it into something that actually MOVES, but, that's next

Oh, and I printed a spiderweb fan dust collector thing in order to, y'know, collect dust, and stop it from getting into the cooling fins of the heat sink cuz the spider one I printed looked cool, but, didn't actually stop any dust

I also found a program to control the fan speed automagically, which just happens to be called Fan AutoMagic or something https://github.com/Pyrestone/jetson-fan-ctl

I think it works well, except that with the thing running in low power mode, it never gets warm enough for the fan to turn on, and I don't see that changing once I get it mounted to the chassis, cuz, where am I gonna put enough batteries for hi-power mode ?

Even if this works, which I see no reason why it wouldn't, except for that law about things not working, it still doesn't have the software for the MD10C which is what I would want if this is the setup I was gonna actually use. On the other hand, if it DOES work, it seems that it might be worth futzing with the programming to use the MD10C's instead of the featherwing (unless I daisy chain the things, which seems totally stupid and something I would try)

Okay. Back to the workbench

So both of the pi-cams I have are both ver 1.3, and apparently, you need version 2, so, we move on to plan B

And since I don't have a plan B, I'm just going to wing it. Luckily, I have an extra C270, which seems to work just fine

Mounting it, however, on this tiny little frame, is going to be fun

Well, it works... After a fashion. Carrying enough power on a frame this small is an issue, plus the Jetson doesn't seem to like the gamepad I'm trying to use as a joystick. The keyboard controls work. And I need to learn the web interface thing so that I can program the obstacle avoidance. It even has a roaming mode, which, of course, won't work without the obstacle avoidance, but I think that's just a learning curve for the interface. You actually have to teach it what it means to be "blocked" and what it means to be "free", which is cool

I was attempting to test something using ROS the way it was intended, with 2 SBC's and an arduino, but, that got complicated, so I removed parts until I got it to work, and what I got to work was the RPI mounted on a frame with wheels, using the L298N controller. This worked fine, until I tried to add the arduino into the mix, at which point I got confused, and then the Featherwing finally showed up, so I swapped out the RPI in the frame for the Jetson nano so that I could test the Jetbot project, which was already programmed, if you had the right hardware

This is working, except that it appears that the Feathwerwing sucks about 4.5V right off the top just to run it, which meant that the batteries I had been using successfully with the L298N were no longer powerfull enough to run the motors at full speed. I tried mounting all the batteries on the frame, but, it was just too unwieldy. There was just no place to mount all the batteries I needed for both the Jetson and the motors 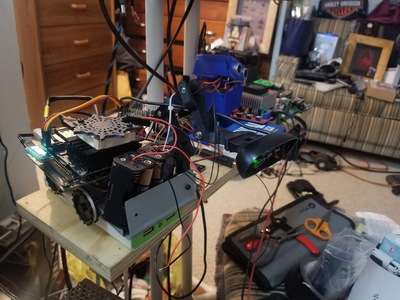 So,  I decided that I needed a bigger frame to test the Jetbot on, and, since I FINALLY finished a project on my printers, they were now free to use for something else, which is a new frame for the Jetbot. Since my printer isn't actually big enough to print all the parts I need, I'm only going to print the parts that I can't otherwise fabricate. So I'm printing the tank treads and tread mechanisms, then I'll just build the platform out of wood or metal

These parts are pretty big, so, some of them are taking a full day each to print, and others, like the tank treads, well, I need a LOT of them, and due to really good bed adhesion, I'm only printing the links in lots of 3 each, which means that this could take awhile

I didn't have any of those in stock

Thank you. That's extremely kind. But, I only chose that because it was something I already had sitting on a shelf that I could use instantly, plus, Bill already covered the L298N in a video about 2 years ago, so I had a passing familiarity with it

If you think one of those would be a better idea, I'll go ahead and order a few, however, that would also require sketches that I don't currently have

What's the more specs or type you are going to use and how many?  Based on that I can pinpoint a recommendation.

It depends on which project we're talking about. For the Jetbot, I'm kinda stuck with the controller that Nvidia programmed it for (cuz I'm lame when it comes to programming), although I can change the motors, which I plan to do. I just ordered a couple different models for that one cuz I'm building a new case for it so I will have more room.

The other one, well, the motors came with the frame, which is 20 years old. They seem to be about 6V motors (markings have long since worn off, but they seem to work fine with 6V). This one doesn't matter which controller I use. This is the one I want to use with arduino and Pi 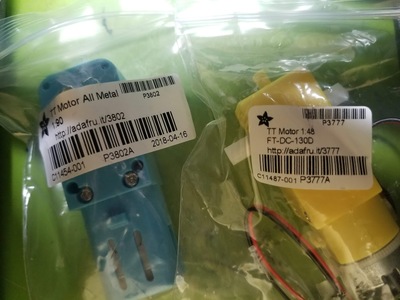 And here's the new test base unit for the Jetson. Obviously, still a work in progress. I needed to print 34 of those individual tank treads, drill out the supports, file them, etc. That took about a week, and I still haven't finished printing the treads for the other side

The ruler should give you an idea of scale. The reason that the treads look different from the base unit is that I'm using two different filaments on two different printers. One printer is printing the base part, wheels, gears, etc, and the other is doing nothing but tank treads. I've only got 25 printed so far for the other side, and I've still got to make some kind of chassis to connect the two halves. I'm leaning toward sheet metal for that, and I still haven't decided if I want one motor per side, or two. I originally planned for only one, cuz it's just a test bed, but, I did leave room for two per side

Since it's just a test bed, none of the ideas for this thing are set in stone yet

They're all set in... melted plastic ? 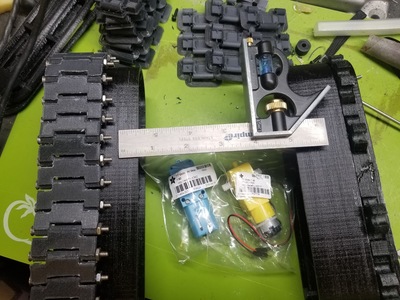 I decided to go with 2 motors per side for a total of 4, and this thing should be capable of holding enough power to run them all pretty easily. I'm not happy with the way that the wheels turn the tracks tho, so I've got some re-engineering to do 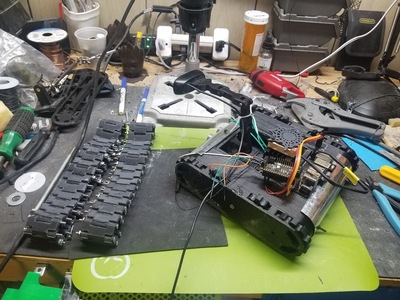 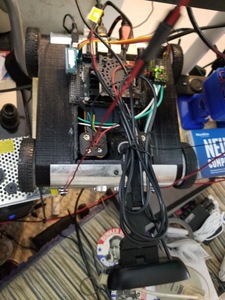 I temporarily removed the treads and replaced them with wheels. The treads fit over the wheels for when I want to put them back on, but, I've got the thing up on "jacks" and it pretty much weighs a ton with the treads on it, plus, all I'm doing right now is testing the wheel action

I, of course, got it wrong the first two times. But it's right now (as far as the jetbot notebook software is concerned anyway)

I've started the teleop thingy, and it sorta works. I can't seem to get a picture out of the camera via the notebook, but it works fine in the cheese program that comes with the Ubuntu version of Jetbot software

I ordered the PiCam V2 that it says it wants, but it hasn't showed up yet. I'll worry about that later

When I get to the part of the notebook where it's supposed to move the bot with the on screen buttons, it works fine, but, it's giving me an error when I try to use the gamepad joystick thingy. I looked at this page

Which tells you about your joystick, and it looks like, according to the software, that it controls the motors individually with the left-right controls. So the left knob is for the left motor, and the right knob is for the right motor. Logical I guess, but, if it worked, it seems like a straight line might not be an easy thing to accomplish 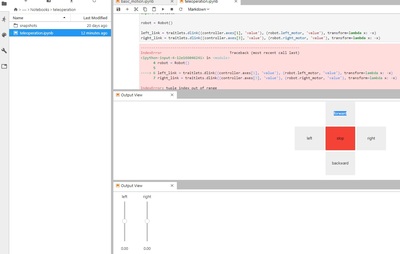 If somebody could help me decipher this it'd be greatly appreciated

Also, I put a 15,000ma battery in it to run the Jetson in low power mode, which works, and I've got some batteries for the motors, so, it's self powered right now, so I guess that's a plus.

Joystick-Teleop control is where I'm stuck right now. Axis 1 and axis 3 is giving me readings, but it's not making the thing move

I think I understand the camera now. The jetbot software is written specifically for the IMX219, so any camera with that chip is gonna work, just not any of the ones I currently have

Still don't have an answer on the joystick yet tho

I got the joystick working ! (yay)

It's digital proportional too, so, less movement on the stick equates to slower speed. And there's enough buttons on the joystick screen that if I knew what i was doing I might be able to add more functions to the robot.

Although, calling it a robot right now is a bit of an exaggeration. It's more of a fancy remote control toy tank at this point

A tank sans tank treads. I'll put them back on when I'm ready tho