Skip to content
Forums
Inside the Workshop
Components & Progra...
Raspberry Pi
How long will your ...

How long will your Pi run?

I mentioned this in another thread, but it was sort of off-topic there.  Yesterday I activated a spare Pi 3B+ using this fellow's scheme: 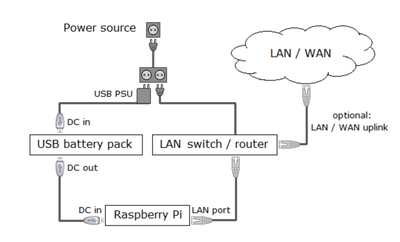 I don't have it fully assembled yet.  The Pi is patched "up to date" with Raspbian Buster as of 19 February 2020 and now off of the Internet (removing the router IP from eth0: seems to be the easiest way to do this.)  I still have to add a dedicated switch that I have laying around.  I also now have a use for a spare 13000 mAh power bank.  I want to see if I can get an uptime of over a year.  I need the power bank because we get 2-3 power outages a year.  I plan no updates and it's just going to sit there on the LAN.  Occasionally I'll SSH in to check the uptime, but other than that, it will do nothing.

I plan no updates and it's just going to sit there on the LAN.  Occasionally I'll SSH in to check the uptime, but other than that, it will do nothing

Well, so much for that bright idea. It turns out most (all?) inexpensive lithium cell power banks won't discharge and charge simultaneously. I don't know where the guy who put that website up got his. It doesn't seem they make it anymore.

I have a couple that could do the job (a 13000 mAh and a 24000 mAh), but as soon as you plug in the charger port, it kills the output. According to some research, these things are rare because they would need fairly complex circuitry to do so. The bottom line is one would have to buy a real UPS, and I'm not wasting money on such a beast to keep a Pi running indefinitely. I thought an uptime of over a year would be neat, but it's not worth the effort. Where I live, we get 2-3 power outages that last up to a day every year, so keeping power going to a Pi 3 B+ without a proper UPS seems more complicated than the guy on the website suggests.

A few months ago I made a steampunk laptop that's powered by either AC or DC. I did think about looking into a solution that included somehow modifying a real laptop circuit from an old laptop, but, I never actually went down that road, and settled instead for just choosing between AC or DC with a switch

I didn't give up on that because I failed, I gave up on it because the thing worked as it was, so I moved on to other projects. It might be a path to follow up on tho